Tendonitis (also tendinitis), meaning inflammation of a tendon, is a type of tendinopathy often confused with the more common tendinosis, which has similar symptoms but requires different treatment. The term tendinitis should be reserved for tendon injuries that involve larger-scale acute injuries accompanied by inflammation. Generally tendinitis is referred to by the body part involved, such as Achilles tendinitis (affecting the Achilles tendon), or patellar tendinitis (jumper’s knee, affecting the patellar tendon).

The condition stems from the repetition of a particular movement over time. Tendonitis can also be caused by a sudden injury. In the majority of cases, tendinitis develops in people whose jobs or hobbies involve repetitive movements which put stress on the tendons needed to perform the tasks.

Signs and Symptoms of Tendonitis

Tendinitis signs and symptoms occur at the point where the tendon attaches to a bone and usually include: 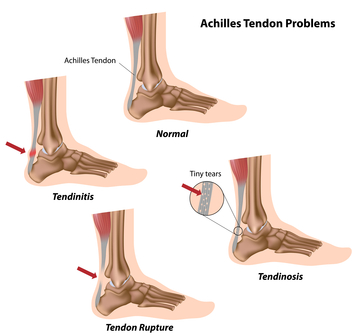 Symptoms can vary from aches or pains and local joint stiffness, to a burning that surrounds the whole joint around the inflamed tendon. In some cases, swelling occurs along with heat and redness, and there may be visible knots surrounding joint. With this condition, the pain is usually worse during and after activity, and the tendon and joint area can become stiff the following day as muscles tighten from the movement of the tendon. Many patients report stressful situations in their life in correlation with the beginnings of pain which may contribute to the symptoms. If the symptoms of tendinitis last for several months or longer it is probably tendinosis.

Treatment of tendon injuries is largely conservative. Use of non-steroidal anti-inflammatory drugs (NSAIDs), rest, and gradual return to exercise is a common therapy. Resting assists in the prevention of further damage to the tendon. Ice, compression and elevation are also frequently recommended. Physical therapy, Occupational therapy, orthotics or braces may also be useful. Initial recovery is typically within 2 to 3 days and full recovery is within 4 to 6 weeks. Tendinosis occurs as the acute phase of healing has ended (6–8 weeks) but has left the area insufficiently healed; Treatment of tendinitis helps reduce some of the risks of developing tendonosis, which takes longer to heal.

Steroid injections have not been shown to have long term benefits but have been shown to be more effective than NSAIDs in the short term.

In chronic tendinitis or tendonosis laser therapy has been found to be better than conservative treatment at reducing pain; however, no other outcomes were assessed. Both prolotherapy and PRP injections are being used more frequently with good clinical short and long term outcomes in tendonosis – research has been only slightly positive for these treatment modalities due to the poor design of many of the completed studies.