Poliomyelitis, often called polio or infantile paralysis, is an acute, viral, infectious disease spread from person to person, primarily via the fecal-oral route. The term, refers to the grey matter of the spinal cord, and the suffix -itis, which denotes inflammation, i.e., inflammation of the spinal cord’s grey matter, although a severe infection can extend into the brainstem and even higher structures, resulting in polioencephalitis, producing apnea that requires mechanical assistance such as an iron lung.

Although approximately 90% of polio infections cause no symptoms at all, affected individuals can exhibit a range of symptoms if the virus enters the blood stream. In about 1% of cases, the virus enters the central nervous system, preferentially infecting and destroying motor neurons, leading to muscle weakness and acute flaccid paralysis. Different types of paralysis may occur, depending on the nerves involved.

Spinal polio is the most common form, characterized by asymmetric paralysis that most often involves the legs. Bulbar polio leads to weakness of muscles innervated by cranial nerves. Bulbospinal polio is a combination of bulbar and spinal paralysis.

Poliomyelitis is caused by infection with a member of the genus Enterovirus known as poliovirus (PV). This group of RNA viruses colonize the gastrointestinal tract specifically the oropharynx and the intestine. The incubation time (to the first signs and symptoms) ranges from three to 35 days, with a more common span of six to 20 days. PV infects and causes disease in humans alone.Its structure is very simple, composed of a single (+) sense RNA genome enclosed in a protein shell called a capsid. In addition to protecting the virus’s genetic material, the capsid proteins enable poliovirus to infect certain types of cells. Three serotypes of poliovirus have been identified—poliovirus type 1 (PV1), type 2 (PV2), and type 3 (PV3)—each with a slightly different capsid protein. All three are extremely virulent and produce the same disease symptoms. PV1 is the most commonly encountered form, and the one most closely associated with paralysis.

Individuals who are exposed to the virus, either through infection or by immunization with polio vaccine, develop immunity. In immune individuals, IgA antibodies against poliovirus are present in the tonsils and gastrointestinal tract, and are able to block virus replication; IgG and IgM antibodies against PV can prevent the spread of the virus to motor neurons of the central nervous system. Infection or vaccination with one serotype of poliovirus does not provide immunity against the other serotypes, and full immunity requires exposure to each serotype.

A rare condition with a similar presentation, nonpoliovirus poliomyelitis, may result from infections with nonpoliovirus enteroviruses.

Signs and Symptoms of Poliomyelitis

Although approximately 90% of polio infections cause no symptoms at all, affected individuals can exhibit a range of symptoms if the virus enters the blood stream. In most people with a normal immune system, a poliovirus infection is asymptomatic. Rarely, the infection produces minor symptoms; these may include upper respiratory tract infection (sore throat and fever), gastrointestinal disturbances (nausea, vomiting, abdominal pain, constipation or, rarely, diarrhea), and influenza-like illness.

The virus enters the central nervous system in about 3% of infections. Most patients with CNS involvement develop nonparalytic aseptic meningitis, with symptoms of headache, neck, back, abdominal and extremity pain, fever, vomiting, lethargy, and irritability. About one to five in 1000 cases progress to paralytic disease, in which the muscles become weak, floppy and poorly controlled, and, finally, completely paralyzed; this condition is known as acute flaccid paralysis. Depending on the site of paralysis, paralytic poliomyelitis is classified as spinal, bulbar, or bulbospinal. Encephalitis, an infection of the brain tissue itself, can occur in rare cases, and is usually restricted to infants. It is characterized by confusion, changes in mental status, headaches, fever, and, less commonly, seizures and spastic paralysis.

Early symptoms of paralytic polio include high fever, headache, stiffness in the back and neck, asymmetrical weakness of various muscles, sensitivity to touch, difficulty swallowing, muscle pain, loss of superficial and deep reflexes, paresthesia (pins and needles), irritability, constipation, or difficulty urinating. Paralysis generally develops one to ten days after early symptoms begin, progresses for two to three days, and is usually complete by the time the fever breaks.

The bulbar region is a white matter pathway that connects the cerebral cortex to the brain stem. The destruction of these nerves weakens the muscles supplied by the cranial nerves, producing symptoms of encephalitis, and causes difficulty breathing, speaking and swallowing. Critical nerves affected are the glossopharyngeal nerve (which partially controls swallowing and functions in the throat, tongue movement, and taste), the vagus nerve (which sends signals to the heart, intestines, and lungs), and the accessory nerve (which controls upper neck movement). Due to the effect on swallowing, secretions of mucus may build up in the airway, causing suffocation. Other signs and symptoms include facial weakness (caused by destruction of the trigeminal nerve and facial nerve, which innervate the cheeks, tear ducts, gums, and muscles of the face, among other structures), double vision, difficulty in chewing, and abnormal respiratory rate, depth, and rhythm (which may lead to respiratory arrest). Pulmonary edema and shock are also possible and may be fatal.

Approximately 19% of all paralytic polio cases have both bulbar and spinal symptoms; this subtype is called respiratory or bulbospinal polio. Here, the virus affects the upper part of the cervical spinal cord (cervical vertebrae C3 through C5), and paralysis of the diaphragm occurs.

The critical nerves affected are the phrenic nerve (which drives the diaphragm to inflate the lungs) and those that drive the muscles needed for swallowing. By destroying these nerves, this form of polio affects breathing, making it difficult or impossible for the patient to breathe without the support of a ventilator. It can lead to paralysis of the arms and legs and may also affect swallowing and heart functions.

Factors that increase the risk of polio infection or affect the severity of the disease include immune deficiency, malnutrition, physical activity immediately following the onset of paralysis, skeletal muscle injury due to injection of vaccines or therapeutic agents, and pregnancy. Although the virus can cross the maternal-fetal barrier during pregnancy, the fetus does not appear to be affected by either maternal infection or polio vaccination. Maternal antibodies also cross the placenta, providing passive immunity that protects the infant from polio infection during the first few months of life.

As a precaution against infection, public swimming pools were often closed in affected areas during poliomyelitis epidemics.

Paralytic poliomyelitis may be clinically suspected in individuals experiencing acute onset of flaccid paralysis in one or more limbs with decreased or absent tendon reflexes in the affected limbs that cannot be attributed to another apparent cause, and without sensory or cognitive loss.

A laboratory diagnosis is usually made based on recovery of poliovirus from a stool sample or a swab of the pharynx. Antibodies to poliovirus can be diagnostic, and are generally detected in the blood of infected patients early in the course of infection. Analysis of the patient’s cerebrospinal fluid (CSF), which is collected by a lumbar puncture (“spinal tap”), reveals an increased number of white blood cells (primarily lymphocytes) and a mildly elevated protein level. Detection of virus in the CSF is diagnostic of paralytic polio, but rarely occurs.

If poliovirus is isolated from a patient experiencing acute flaccid paralysis, it is further tested through oligonucleotide mapping (genetic fingerprinting), or more recently by PCR amplification, to determine whether it is “wild type” (that is, the virus encountered in nature) or “vaccine type” (derived from a strain of poliovirus used to produce polio vaccine). It is important to determine the source of the virus because for each reported case of paralytic polio caused by wild poliovirus, an estimated 200 to 3,000 other contagious asymptomatic carriers exist. 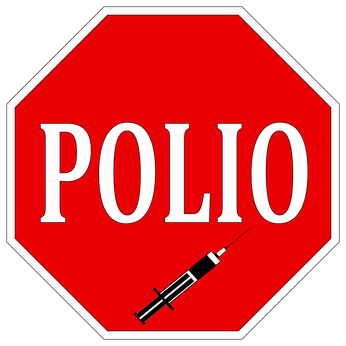 The gamma globulin consists of the blood plasma of polio survivors.The gamma globulin, which contained antibodies to poliovirus, could be used to halt poliovirus infection, prevent disease, and reduce the severity of disease in other patients who had contracted polio. The results of a large clinical trial were promising; the gamma globulin was shown to be about 80% effective in preventing the development of paralytic poliomyelitis. It was also shown to reduce the severity of the disease in patients who developed polio. The gamma globulin approach was later deemed impractical for widespread use, however, due in large part to the limited supply of blood plasma, so the medical community turned its focus to the development of a polio vaccine.

Because OPV (oral polio vaccine) is inexpensive, easy to administer, and produces excellent immunity in the intestine (which helps prevent infection with wild virus in areas where it is endemic), it has been the vaccine of choice for controlling poliomyelitis in many countries. On very rare occasions (about one case per 750,000 vaccine recipients), the attenuated virus in OPV reverts into a form that can paralyze. Most industrialized countries have switched to IPV, which cannot revert, either as the sole vaccine against poliomyelitis or in combination with oral polio vaccine.

There is no cure for polio. The focus of modern treatment has been on providing relief of symptoms, speeding recovery and preventing complications. Supportive measures include antibiotics to prevent infections in weakened muscles, analgesics for pain, moderate exercise and a nutritious diet. Treatment of polio often requires long-term rehabilitation, including occupational therapy, orthotics, physical therapy, and, in some cases, orthopedic surgery.

Orthotic treatment may involve the prescription of anything from specialist footwear to an ankle foot orthosis (AFO) or knee ankle foot orthosis (KAFO). Appropriate orthotic intervention improves walking ability and safety, knee pain and general pain .Portable ventilators may be required to support breathing. Historically, a noninvasive, negative-pressure ventilator, more commonly called an iron lung, was used to artificially maintain respiration during an acute polio infection until a person could breathe independently (generally about one to two weeks). Today, many polio survivors with permanent respiratory paralysis use modern jacket-type negative-pressure ventilators worn over the chest and abdomen.

Other historical treatments for polio include hydrotherapy, electrotherapy, massage and passive motion exercises, and surgical treatments, such as tendon lengthening and nerve grafting.