Osteoporosis is a progressive bone disease that is characterized by a decrease in bone mass and density which can lead to an increased risk of fracture. In osteoporosis, the bone mineral density (BMD) is reduced, bone microarchitecture deteriorates, and the amount and variety of proteins in bone are altered.

Osteoporosis is a component of the frailty syndrome.

In female sex; estrogen deficiency following menopause or oophorectomy is correlated with a rapid reduction in bone mineral density, while in men, a decrease in testosterone levels has a comparable (but less pronounced) effect. While osteoporosis occurs in people from all ethnic groups.

The heritability of the fracture, as well as low bone mineral density, are relatively high, ranging from 25 to 80%. At least 30 genes are associated with the development of osteoporosis.

Signs and Symptoms of Osteoporosis

Fractures are the most dangerous aspect of osteoporosis. Debilitating acute and chronic pain in the elderly is often attributed to fractures from osteoporosis and can lead to further disability and early mortality. These fractures may also be asymptomatic. The most common osteoporotic fractures are of the wrist, spine, shoulder and hip. The symptoms of a vertebral collapse (“compression fracture”) are sudden back pain, often with radicular pain (shooting pain due to nerve root compression) and rarely with spinal cord compression or cauda equina syndrome. Multiple vertebral fractures lead to a stooped posture, loss of height, and chronic pain with resultant reduction in mobility.

Fractures of the long bones acutely impair mobility and may require surgery. Hip fracture, in particular, usually requires prompt surgery, as serious risks are associated with it, such as deep vein thrombosis and pulmonary embolism, and increased mortality.

The increased risk of falling associated with aging leads to fractures of the wrist, spine, and hip. The risk of falling, in turn, is increased by impaired eyesight due to any cause (e.g. glaucoma, macular degeneration), balance disorder, movement disorders (e.g. Parkinson’s disease), dementia, and sarcopenia (age-related loss of skeletal muscle). Collapse (transient loss of postural tone with or without loss of consciousness) leads to a significant risk of falls; causes of syncope are manifold, but may include cardiac arrhythmias (irregular heart beat), vasovagal syncope, orthostatic hypotension (abnormal drop in blood pressure on standing up), and seizures. Removal of obstacles and loose carpets in the living environment may substantially reduce falls. Those with previous falls, as well as those with gait or balance disorders, are most at risk.

Risk factors for osteoporotic fracture can be split between nonmodifiable and (potentially) modifiable. In addition, osteoporosis is a recognized complication in specific diseases and disorders. Medication use is theoretically modifiable, although in many cases, the use of medication that increases osteoporosis risk may be unavoidable. Caffeine is not a risk factor for osteoporosis.

Many diseases and disorders have been associated with osteoporosis. For some, the underlying mechanism influencing the bone metabolism is straightforward, whereas for others the causes are multiple or unknown.

Certain medications have been associated with an increase in osteoporosis risk; only steroids and anticonvulsants are classically associated, but evidence is emerging with regard to other drugs.

Age related bone loss is common among humans due to exhibiting less dense bones than other primate species. Because of the more porous bones of humans, frequency of severe osteoporosis and osteoporosis related fractures is higher. The human vulnerability to osteoporosis is an obvious cost but it can be justified by the advantage of bipedalism inferring that this vulnerability is the byproduct of such. It has been suggested that porous bones help to absorb the increased stress that we have on two surfaces compared to our primate counterparts who have four surfaces to disperses the force. In addition, the porosity allows for more flexibility and a lighter skeleton that is easier to support.

One other consideration may be that diets today have much lower amounts of calcium than the diets of other primates or the tetrapedal ancestors to humans which may lead to higher likelihood to show signs of osteoporosis. 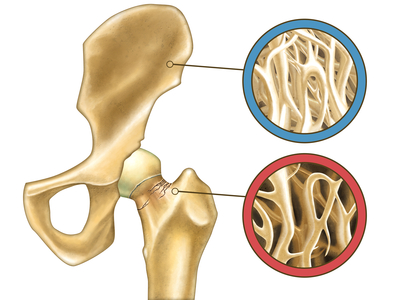 The diagnosis of osteoporosis can be made using conventional radiography and by measuring the bone mineral density (BMD). The most popular method of measuring BMD is dual-energy x-ray absorptiometry. In addition to the detection of abnormal BMD, the diagnosis of osteoporosis requires investigations into potentially modifiable underlying causes; this may be done with blood tests. Depending on the likelihood of an underlying problem, investigations for cancer with metastasis to the bone, multiple myeloma, Cushing’s disease and other above-mentioned causes may be performed.

Conventional radiography is useful, both by itself and in conjunction with CT or MRI, for detecting complications of osteopenia (reduced bone mass; preosteoporosis), such as fractures; for differential diagnosis of osteopenia; or for follow-up examinations in specific clinical settings, such as soft tissue calcifications, secondary hyperparathyroidism, or osteomalacia in renal osteodystrophy. However, radiography is relatively insensitive to detection of early disease and requires a substantial amount of bone loss (about 30%) to be apparent on X-ray images.

The main radiographic features of generalized osteoporosis are cortical thinning and increased radiolucency. Frequent complications of osteoporosis are vertebral fractures for which spinal radiography can help considerably in diagnosis and follow-up. Vertebral height measurements can objectively be made using plain-film X-rays by using several methods such as height loss together with area reduction, particularly when looking at vertical deformity in T4-L4, or by determining a spinal fracture index that takes into account the number of vertebrae involved. Involvement of multiple vertebral bodies leads to kyphosis of the thoracic spine, leading to what is known as dowager’s hump.

Dual-energy X-ray absorptiometry (DXA) is considered the gold standard for the diagnosis of osteoporosis. Osteoporosis is diagnosed when the bone mineral density is less than or equal to 2.5 standard deviations below that of a young , healthy adult women reference population.

This is translated as a T-score. But because bone density decreases with age, more people become osteoporotic with increasing age.

Chemical biomarkers are a useful tool in detecting bone degradation. The enzyme cathepsin K breaks down type-I collagen protein, an important constituent in bones. Prepared antibodies can recognize the resulting fragment, called a neoepitope, as a way to diagnose osteoporosis. Increased urinary excretion of C-telopeptides, a type-I collagen breakdown product, also serves as a biomarker for osteoporosis.

Quantitative computed tomography differs from DXA in that it gives separate estimates of BMD for trabecular and cortical bone and reports precise volumetric mineral density in mg/cm3 rather than BMD’s relative Z score. Among QCT’s advantages: it can be performed at axial and peripheral sites, can be calculated from existing CT scans without a separate radiation dose, is sensitive to change over time, can analyze a region of any size or shape, excludes irrelevant tissue such as fat, muscle, and air, and does not require knowledge of the patient’s subpopulation in order to create a clinical score (e.g. the Z-score of all females of a certain age). Among QCT’s disadvantages: it requires a high radiation dose compared to DXA, CT scanners are large and expensive, and because its practice has been less standardized than BMD, its results are more operator-dependent. Peripheral QCT has been introduced to improve upon the limitations of DXA and QCT.

Quantitative ultrasound has many advantages in assessing osteoporosis. The modality is small, no ionizing radiation is involved, measurements can be made quickly and easily, and the cost of the device is low compared with DXA and QCT devices. The calcaneus is the most common skeletal site for quantitative ultrasound assessment because it has a high percentage of trabecular bone that is replaced more often than cortical bone, providing early evidence of metabolic change. Also, the calcaneus is fairly flat and parallel, reducing repositioning errors. The method can be applied to children, neonates, and preterm infants, just as well as to adults. Once microimaging tools to examine specific aspects of bone quality are developed, it is expected that quantitative ultrasound will be increasingly used in clinical practice.

The U.S. Preventive Services Task Force (USPSTF) recommend that all women 65 years of age or older be screened by bone densitometry. Additionally they recommend screening women with increased risk factors that puts them at risk equivalent to a 65 year old. There is insufficient evidence to make recommendations about the intervals for repeated screening and the appropriate age to stop screening. In men the harm versus benefit of screening for osteoporosis is unknown. A number of tool exist to help determine who is reasonable to test.

Certain drugs like alendronate, etidronate, risedronate, raloxifene and strontium ranelate can be helpful for the primary prevention of osteoporotic fragility fractures in postmenopausal women.

Lifestyle prevention of osteoporosis is in many aspects the inverse of the potentially modifiable risk factors. As tobacco smoking and high alcohol intake have been linked with osteoporosis, smoking cessation and moderation of alcohol intake are commonly recommended as ways to help prevent it.

Weight-bearing endurance exercise and/or exercises to strengthen muscles improve bone strength in those with osteoporosis. Aerobics, weight bearing, and resistance exercises all maintain or increase BMD in postmenopausal women. Fall prevention can help prevent osteoporosis complications. There is some evidence for hip protectors specifically among those who are in care homes.

As of 2013 there is insufficient evidence to determine if supplementation with calcium and vitamin D results in greater harm or benefit in men and premenopausal women. Low dose supplementation (less than 1 g of calcium and 400 IU of vitamin D) is not recommended in postmenopausal women as there does not appear to be a difference in fracture risk. It is unknown what effect higher doses have. There however may be some benefit for the frail elderly living in care homes.

While vitamin D supplementation alone does not prevent fractures, combined with calcium it might. There however is an increased risk of myocardial infarctions and kidney stones. Vitamin K supplementation may reduce the risk of fractures in post menopausal women; however there is no evidence for men.

Bisphosphonates are useful in decreasing the risk of future fractures in those who have already sustained a fracture due to osteoporosis. This benefit is present when taken for three to four years. They have not been compared directly to each other, though, so it is not known if one is better. Fracture risk reduction is between 25 and 70% depending on the bone involved. There are concerns of atypical femoral fractures and osteonecrosis of the jaw with long term use, but these risk are low. With evidence of little benefit when used for more than three to five years and in light of the potential adverse events, it may be appropriate to stop treatment after this time in some.

For those with osteoporosis but who have not had any fractures evidence does not support a reduction of in fracture risk with risedronate or etidronate. Alendronate may decrease fractures of the spine but does not have any effect on other types of fractures. Half stop their medications within a year.

Teriparatide ( a recombinant parathyroid hormone ) has been shown to be effective in treatment of women with postmenopausal osteoporosis. Some evidence also indicates strontium ranelate is effective in decreasing the risk of vertebral and nonvertebral fractures in postmenopausal women with osteoporosis. Hormone replacement therapy, while effective for osteoporosis, is only recommended in women who also have menopausal symptoms. Raloxifene, while effective in decreasing vertebral fractures, does not affect the risk of nonvertebral fracture. And while it reduces the risk of breast cancer, it increases the risk of blood clots and strokes. Denosumab is also effective for preventing osteoporotic fractures. In hypogonadal men, testosterone has been shown to improve bone quantity and quality, but, as of 2008, no studies evaluated its effect on fracture risk or in men with a normal testosterone levels. Calcitonin while once recommended is no longer due to the associated risk of cancer with its use and questionable effect on fracture risk.