Flat feet (also called pes planus or fallen arches) is a formal reference to a medical condition in which the arch of the foot collapses, with the entire sole of the foot coming into complete or near-complete contact with the ground. In some individuals (an estimated 20–30% of the general population) the arch simply never develops in one foot (unilaterally) or both feet (bilaterally).

Three studies of military recruits have shown no evidence of later increased injury, or foot problems, due to flat feet, in a population of people who reach military service age without prior foot problems. However, these studies cannot be used to judge possible future damage from this condition when diagnosed at younger ages. They also cannot be applied to persons whose flat feet are associated with foot symptoms, or certain symptoms in other parts of the body (such as the leg or back) possibly referable to the foot.

Cause of Flat Feet

The appearance of flat feet is normal and common in infants, partly due to “baby fat” which masks the developing arch and partly because the arch has not yet fully developed. The human arch develops in infancy and early childhood as part of normal muscle, tendon, ligament and bone growth.

Flat feet can also develop as an adult (“adult acquired flatfoot”) due to injury, illness, unusual or prolonged stress to the foot, faulty biomechanics, or as part of the normal aging process.

Signs and Symptoms of Flat Feet

Because young children are unlikely to suspect or identify flat feet on their own, it is a good idea for parents or other adult caregivers to check on this themselves. Besides visual inspection, parents should notice whether a child begins to walk oddly or clumsily, for example on the outer edges of the feet, or to limp, during long walks, and to ask the child whether he or she feels foot pain or fatigue during such walks. Children who complain about calf muscle pains or any other pains around the foot area may be developing or have flat feet. Pain or discomfort may also develop in the knee joints.

If a youth or adult appears flatfooted while standing in a full weight bearing position, but an arch appears when the person dorsiflexes (stands on heel or pulls the toes back with the rest of the foot flat on the floor), this condition is called flexible flatfoot. This is not a true collapsed arch, as the medial longitudinal arch is still present and the Windlass mechanism still operates; this presentation is actually due to excessive pronation of the foot (rolling inwards), although the term ‘flat foot’ is still applicable as it is a somewhat generic term.

Research has shown that tendon specimens from people who suffer from adult acquired flat feet show evidence of increased activity of proteolytic enzymes. These enzymes can break down the constituents of the involved tendons and cause the foot arch to fall. In the future, these enzymes may become targets for new drug therapies.

Flat Feet is most common in women over 40 years of age. Known risk factors include obesity, hypertension and diabetes. Flat feet can also occur in pregnant women as a result of temporary changes, due to increased elastin (elasticity) during pregnancy. However, if developed by adulthood, flat feet generally remain flat permanently.

Also, familial tendency, foot injuries and some diseases that cause muscle imbalance, such as cerebral palsy , spina bifida , or muscular dystrophy are the risk factors for Flat Feet.

Many medical professionals can diagnose a flat foot by examining the patient standing or just looking at them. On going up onto tip toe the deformity will correct when this is a flexible flat foot in a child with lax joints. Such correction is not seen in the adult with a rigid flat foot.
An easy and traditional home diagnosis is the “wet footprint” test, performed by wetting the feet in water and then standing on a smooth, level surface such as smooth concrete or thin cardboard or heavy paper. Usually, the more the sole of the foot that makes contact (leaves a footprint), the flatter the foot. In more extreme cases, known as a kinked flatfoot, the entire inner edge of the footprint may actually bulge outward, where in a normal to high arch this part of the sole of the foot does not make contact with the ground at all.

Muscular training of the feet, while generally helpful, will usually not result in increased arch height in adults, because the muscles in the human foot are so short that exercise will generally not make much difference, regardless of the variety or amount of exercise. However, as long as the foot is still growing, it may be possible that a lasting arch can be created.

With normal, or neutral, running shoes, a person who overpronates in his or her running form may be more susceptible to shin splints, back problems, and tendonitis in the knee. Running in shoes with extra medial support or using special shoe inserts, orthoses, may help correct one’s running form by reducing pronation and may reduce risk of injury. 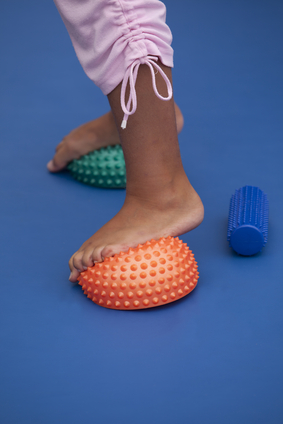 Going barefoot, particularly over terrain such as a beach where muscles are given a good workout, is good for all but the most extremely flatfooted, or those with certain related conditions such as plantar fasciitis. One medical study in India with a large sample size of children who had grown up wearing shoes and others going barefoot found that the longitudinal arches of the barefooters were generally strongest and highest as a group, and that flat feet were less common in children who had grown up wearing sandals or slippers than among those who had worn closed-toe shoes.

Most flexible flat feet are asymptomatic, and do not cause pain. In these cases, there is usually no cause for concern, and the condition may be considered a normal human variant. Flat feet were formerly a physical-health reason for service-rejection in many militaries. However, three military studies on asymptomatic adults, suggest that persons with asymptomatic flat feet are at least as tolerant of foot stress as the population with various grades of arch. Asymptomatic flat feet are no longer a service disqualification in the U.S. military.

Rigid flatfoot, a condition where the sole of the foot is rigidly flat even when a person is not standing, often indicates a significant problem in the bones of the affected feet, and can cause pain in about a quarter of those affected. Other flatfoot-related conditions, such as various forms of tarsal coalition (two or more bones in the midfoot or hindfoot abnormally joined) or an accessory navicular (extra bone on the inner side of the foot) should be treated promptly, usually by the very early teen years, before a child’s bone structure firms up permanently as a young adult.

Both tarsal coalition and an accessory navicular can be confirmed by x-ray. Rheumatoid Arthritis can destroy tendons in the foot (or both feet) which can cause this condition, and untreated can result in deformity and early onset of Osteoarthritis of the joint. Such a condition can cause severe pain and considerably reduced ability to walk, even with orthoses. Ankle fusion is usually recommended.

Treatment of flat feet may also be appropriate if there is associated foot or lower leg pain, or if the condition affects the knees or the lower back. Treatment may include using Orthoses such as an arch support, foot gymnastics or other exercises as recommended by a podiatrist/orthotist or physical therapist. In cases of severe flat feet, orthoses should be used through a gradual process to lessen discomfort.

Over several weeks, slightly more material is added to the orthosis to raise the arch. These small changes allow the foot structure to adjust gradually, as well as giving the patient time to acclimatise to the sensation of wearing orthoses. Once prescribed, orthoses are generally worn for the rest of the patient’s life. In some cases, surgery can provide lasting relief, and even create an arch where none existed before; it should be considered a last resort, as it is usually very time consuming and costly.